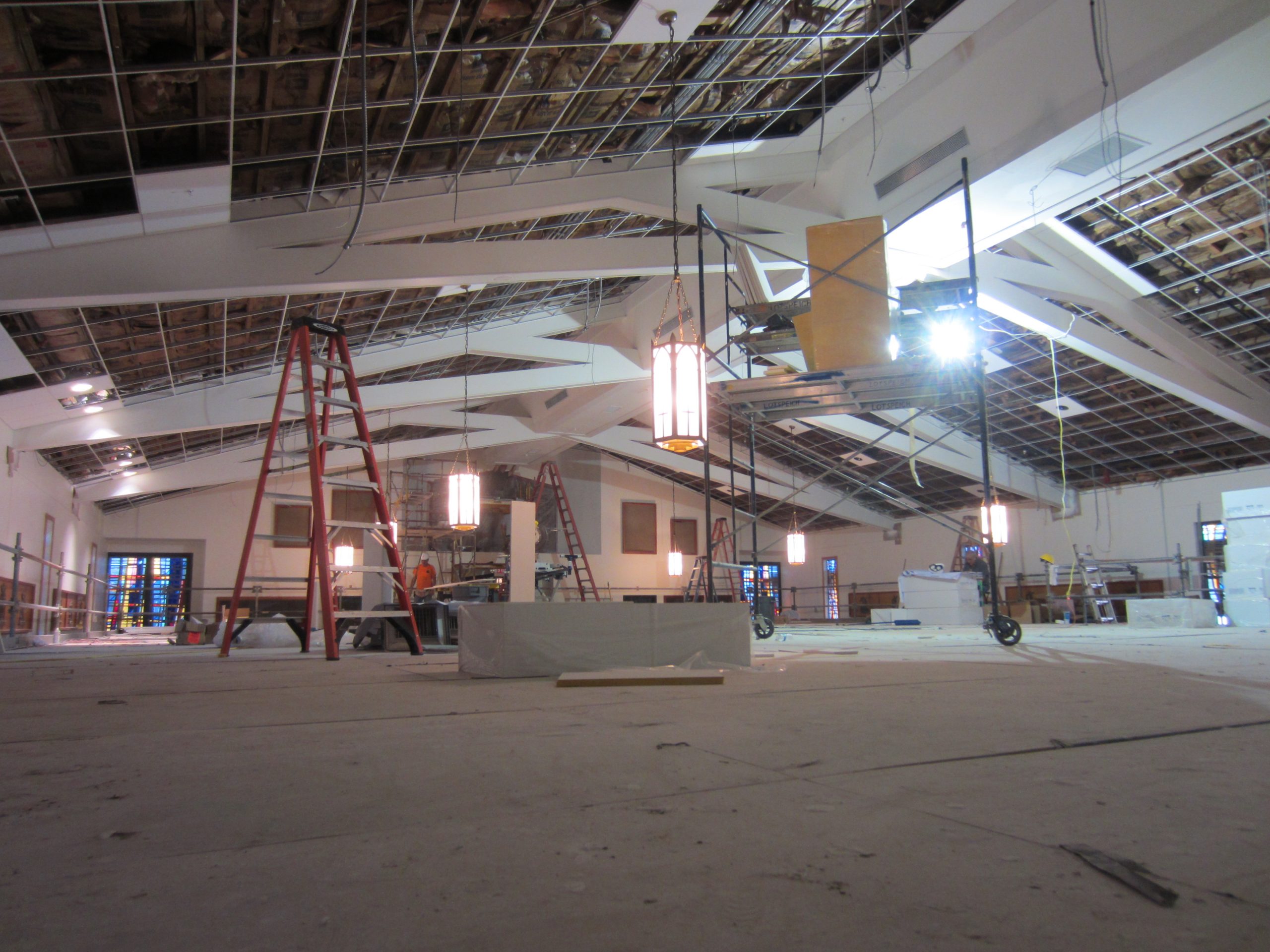 We continue our Renovation Campaign to raise the needed funds to complete the refurbishment and renovation of the church interior that we didn’t have the money to do when we embarked on the Narthex addition. Accordingly, each month you’ll continue to have an envelope in your envelope packets for Renovation Campaign contributions. It’s our intention to continue to raise this money for the church interior renovation, keep it in our dedicated account for that purpose, and proceed with the renovation when we have the funds necessary to pay for that renovation.

How long will that take? When will we proceed with church interior renovations? How much money will we need? At this time, we’re not quite sure. Although we have the design and plans for the interior renovations, our costs and pricing are now out-of-date. As our cash begins to grow for this intended purpose, we can direct our attention to answering those questions in more detail. In any event, depending upon how our continued fundraising goes, we’re surely at least three or four or more years away from beginning any renovations. The good news, of course, is that we’re under no pressure to renovate so we can proceed slowly with raising the funds first.

To understand all of this a little better, it may help to recap how we got here.

Archbishop Hurley established St. Mary as a new parish in January 1966. We opened our church building in May 1968, just 15 days after Pope Paul VI created our new Diocese of St. Petersburg. Our church facilities, originally designed to serve as a “temporary” sanctuary, remained pretty much the same as originally built. So, as we approached the 50th anniversary of the founding of our parish, we began to make plans for the renovations needed for the next 50 years. In general, those plans included:

PHASE I: CONSTRUCTION OF A NEW NARTHEX AND RELATED IMPROVEMENTS.

The new Narthex addition to the front of the existing church building would provide an entry and assembly area, a vesting sacristy, a ministry room, a meeting or “bride’s” room, and new bathrooms (2,432 square feet). It would include a new covered, porte-cochere and entry porches (1,577 square feet). It would include a bell tower and a 125-foot covered walkway or colonnade along the south side of the existing building and new Narthex addition. It would also include a new circular driveway as an integral part of the porte-cochere, an irrigation system and landscaping needed for the Narthex addition, and a Stations of the Cross Prayer Garden on the north side of the church.

In addition to needed restoration and refinishing, the renovation of our worship space contemplated a new sanctuary, reservation tabernacle, St. Mary shrine, and baptismal font at the entrance to the church. The parish center, a separate building, also would receive needed renovations, improvements, and updating.

Our original plan was to move forward with these two phases simultaneously. But, as we drew closer to beginning, it became apparent that we had the financial ability to proceed only with Phase I, leaving Phase II for a later date when our finances would allow.

Accordingly, in April 2015, Bishop Lynch approved our new construction project. The total costs of the approved project were estimated to be $2.3 million, including new construction costs of $1,775,000 and our commitment to the diocese to pay $525,243 to the diocesan Forward in Faith Campaign. This approval also contemplated debt financing of $701,569. Thereafter, approval was given to increase the construction costs to $2,020,000 and to increase the debt financing component to $1,005,000. Our St. Mary Renovation Campaign was also approved as a diocesan capital campaign. (The significance of this later approval is that funds raised in the campaign are exempt from parish, school, and other diocesan assessments.) Pursuant to these approvals, we began construction and closed on our SunTrust Bank loan of $1,005,000 in July 2015.

We completed construction and moved into our new Narthex addition on the first Sunday of Advent 2015. We have paid all construction costs, and we have paid the diocese our $525,243 Forward in Faith commitment. Our St. Mary Renovation Campaign has continued successfully, and we have used the proceeds of that campaign to pay down the SunTrust Bank loan, finally retiring that debt completely in December 2019.

With the completion of our Phase I construction and the payment in full of our SunTrust Bank loan, we need to continue our St. Mary Renovation Campaign to raise the needed funds to move eventually to Phase II of our original renovation plans. We understand that, with the passage of time, construction costs for Phase II will have increased, perhaps substantially. Moreover, our intent is to raise the funds first to complete Phase II, before we begin Phase II construction and thus avoid any debt financing. Because we were to achieve our initial campaign goal of $2 million about simultaneously with the projected paying off the SunTrust Bank loan, in September 2019 Bishop Parkes approved raising our campaign goal by $2 million to a total of $4 million so we can ultimately proceed with Phase II. In all honesty, the amount of this increase is somewhat arbitrary since we do not now know the amount we’ll need to complete Phase II when we’ll have the funds in hand to pay for Phase II.

While this is a long and detailed report and explanation of where we are now and how we got here, there is one main takeaway, that is, the substantial generosity and loyalty of our parishioners. Thanks to all of you for making St. Mary the terrific parish and community that it is.

May God bless you all!